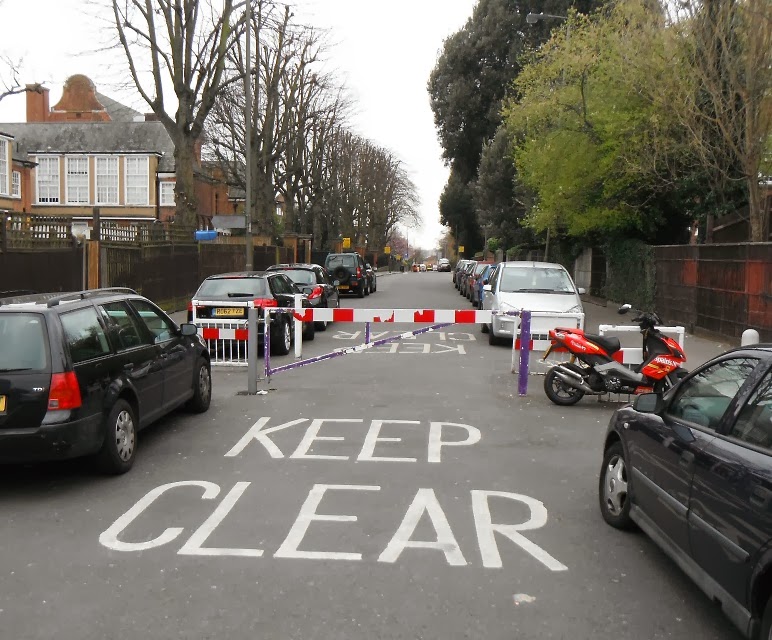 Daytime picture of the gate on Welham Road. Impossible to cycle through, so I mount the pavement to get around the cars. Why there aren't double yellow lines on the approach to the gate passes I don't know.

Just responded to the Conservative's survey on their support for the proposed closure of Welham Road to public access (on foot and by bike).

These are my comments:

----------------------------
Closing this road to through access for people on foot and bicycles would be awful. Currently it provides a safe, quiet route which avoids the horrendous Southcroft Road. Cycling around the top involves going up a hill, expending further energy which when you are cycling or walking one tends to take the easiest route, or one that expends the least amount of energy.

Your support for the closure, yet again, illustrates that you completely don't get that an environment which is attractive to walk and cycle in, is good for everyone irrespective of how they choose to travel. In terms of safety concerns, let's consider how many actual reported incidents there have been in terms of 'stranger danger' and compare against the very real number of people who have been hurt as a result of car crashes in the area.

---------------------------
As I understand it from the local police there have been no reported incidents of 'stranger danger'. However, if you care to look at crashmap.co.uk you will quickly see, there is a very real danger on our streets, with people really getting hurt.

Let's create a safer street environment where walking and cycling are the most attractive ways for people travel short trips (up to 2-3miles), in turn reduce congestion for those who need to drive, as well as reducing wear and tear on our roads.

It isn't difficult to get. Frustrating that the Conservatives (as a party, there are exceptions) are so blind to this, even after years of campaigning by local groups and individuals.

As a result of this post Dan Watkins tweeted me about it. Now he seems to agree that maintaining pedestrian/cycle through access shouldn't be as difficult as keeping space for cars, which in essence the road does at present. Just very unfortunate that simple things like this needed to be pointed out in the first place.