Last Friday an elderly gentleman went shopping in the Foodmarket (formerly Nokta) for some groceries near Tooting Bec.

He was 90 years old, and had a walking stick. From what I've heard he had stopped in the road and was holding onto the lorry when the lights changed. The Wandsworth Guardian ran this article. 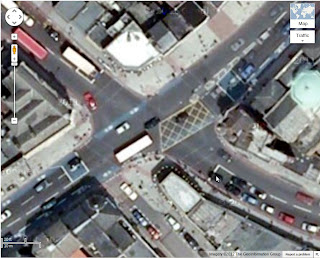 The approach from the south-west is mainly a single lane of traffic due to the parking bays which lie dotted along the "cycle superhighway". No parking is allowed on the final stretch you can see in the image which encourages motor traffic to bunch up thus increasing capacity for motor vehicles through the cross roads.

Similarly from the north west (top left) of the image, the road in question is Trinity Road. This again is a single lane road which opens into two lanes at the cross roads.

Coming from Balham there is a bus lane which means that from 500m away most motor traffic needs to be in single file.

The approach from Tooting Bec common / Streatham is similar. A bus lane runs for a significant stretch before the cross roads and then disappears to facilitate two waiting lines of motor traffic.

This approach results in again in a race track approach to the lights changing. With drivers itching to beat each other as the lights change, only to have to filter back into single file on the other side of the crossroads.

Paul James has done some excellent graphics illustrating how our crossroads could be re-designed, and I've basically borrowed those ideas to do this rough and ready example below. 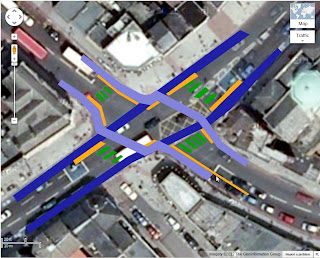 As per my previous post, the orange parts offer protection between the cycle paths and the main traffic lanes. The navy blue lines are the existing CSH tracks, and the green bars represent new pedestrian crossings.

This week has seen both Sadiq Khan MP, and Jane Ellison MP attend a debate in Westminster Hall on cycle safety which has happened due to the "Cities for Cycling" campaign launched a few weeks ago by The Times. I would urge you to sign to show your support if you haven't done so already.

In one of their leading articles yesterday they explained that the campaign is much bigger than just cyclists indeed they said:

"If this newspaper's cycle safety campaign should result only in safer cycling, it must be considered a failure."

"Success.. would be a fundamental change in the popular expectation of how British cities ought to look."

"Our cities must be reimagined so that the cyclist is no hindrance to the motorist, and the motorist no danger in return. The weary driver, the sweaty train commuter, the pedestrian running late: all will benefit when more Britons get on their bikes."

This national campaign is followed by a London focused one for the Mayoral elections called "Love London, Go Dutch" promoted by the London Cycling Campaign. In the same vein, this is about reimagining how our local area could be. I hope that my visualisation may help be part of that discussion.
Posted by Jon at 08:35 No comments:

This afternoon I saw this at Tooting Broadway. 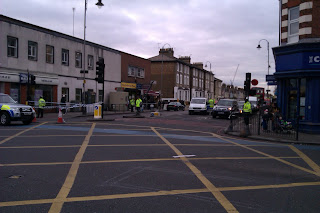 It's happened today, and last month something similar happened to one of the traffic lights on the north side heading up Tooting High Road.

It would appear, and this is speculation, that someone was driving a motor vehicle too fast and they took out the post. The CSO I spoke with didn't know what had happened, and his colleagues were investigating. It seems that the person who caused the incident didn't hang around or report it. That's not to say they won't later, but chances are that they won't.

This crossroads is a nightmare from a people friendly perspective.

The excellent "Love London, Go Dutch" campaign by LCC asks the following “I want the mayoral candidates to pledge to make London more liveable for everyone by making our streets as safe and inviting for cycling as they are in Holland”. Please do show your support and sign up here.

It got me thinking, could Tooting Broadway be better? Could it be easier to cross the road? Would it be possible not to be penned in like cattle when crossing the road?


I'm no designer but I think that taking ideas from other blogs (exact reference to come) something like this would be much better.


To explain the colours in orange there would be new islands. In mauve the cycle routes around. In green the new direct pedestrian crossings. This would reduce the amount of wasted space in the centre of the cross roads. As a consequence people who are driving would be less likely to fly through at speed and collide with people or traffic light posts.


This Youtube clip which talks it through very easily.


Let me know your thoughts.