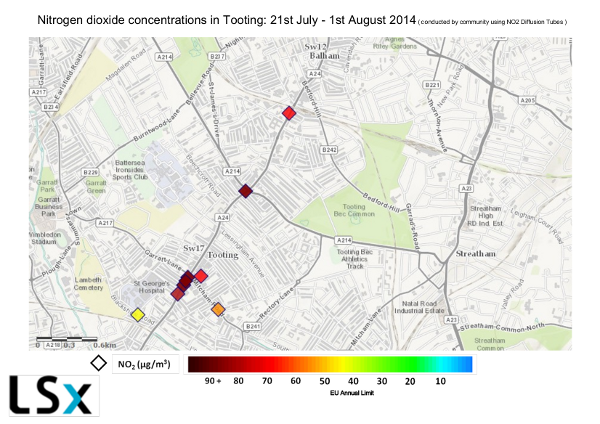 Work done over the summer has highlighted the horrendous air pollution that Tooting residents are currently living with.

The Furzedown Low Carbon Zone (FLCZ), supported by the trades unions, Transition Town Tooting and the London Sustainability Exchange collected samples from the 21st July to the 1st August. Download the pdf of the image above here.

This builds on work that the London Sustainability Exchange has been doing with other community groups across the borough.

Putney High Street is infamous for it's high levels of air pollution. The respite offered with the works on Putney Bridge over the summer (see this chart for the run up, and this chart for when it re-opened) clearly highlights that it is the volume of motor traffic that is the principle cause of the problem. In Battersea, around Clapham Junction train station there are black spots too.

**Update**
The Battersea Society with their ‘citizen science’ surveys have produced some alarming results. At Clapham junction they found that particulate matter, the most dangerous type of urban pollution , was five times above the European Union Limit and nitrogen dioxide levels were double the European limit.
**Update**

We need real political leadership to drive change on this. We can't afford to ignore the evidence. Something that me and my Lib Dem colleagues have been fighting for locally. Creating safer streets where walking and cycling short trips are the norm is a key part of the solution.

What can you do?

If you haven't signed the following petitions please do:

Also on the 22nd October, FLCZ are hosting a film night to discuss & fund raise for further local actions to be taken. You can register here.

**Update re: Other events**
On the 23rd October, The Putney Society are running the following event: What is happening in the battle against poor air quality? 7.30pm, at St Mary's Chuch, Putney. £3 for non Putney Society members to attend, free for members. Includes speakers from Kings College as well as Cabinet member Cllr Jonathan Cook.

**Update x2 - Transition Town Tooting event**
Date: Wed, November 26, 7:30pm – 9:00pm
Venue: Tooting United Reform Church, Rookstone Road, SW17 (junction with Mitcham Road) (map)
Did you know that if you live in London you lose approx 2 years of life expectancy from air pollution? Tthere are parts of Tooting where Nitrogen Dioxide levels are 2 to 3 times the European safe exposure limit? Tests carried out on Tooting High Street show dangerous levels of air pollution. The Mayor of London’s ’ultra-low emission zone’ does not include Tooting. Much more needs to be done to ensure Tooting has a clear bill of health! This event will look at the issues in depth.
Posted by Jon at 03:13 No comments:

As well as some beautiful scenery (in between the showers) for everyone using the roads, we all need to adjust to the new conditions. Riding my regular route to work, I'm acutely aware of the defects in the road. Our fellow road users in their cars/vans seem blissfully unaware.

The reason I, and others, cycle out in the middle of the lane on some busy roads is not to hold up others who are driving on the same road. It is to avoid being thrown off my bike by a cracked up road surface which will end up being a significant pothole.

When it is wet I'm also aware that my braking ability is diminished and change my speed accordingly. I'd be incredibly grateful if other road users (in cars, vans, buses, lorries) could do the same. Being tail gated whilst riding on a wet road surface is far from pleasant. If I were to fall I could be killed by the simple virtue of the person behind not having given me enough distance to stop.

Too often I do have little chats with drivers on my way home. They overtake in an aggressive manner, I catch them up 1-1.5km further ahead as they are stuck in traffic at lights. Some are nice, others aren't, but the fact remains that they didn't gain any time by driving aggressively. I've reported drivers to the police, nothing really comes of it.

I'd love to not give drivers the impression that I'm holding them up. It's why I've shown my support for TfL's proposed new cycle superhighways in the centre of town.

You can too via London Cycling Campaigns easy to use tool here.