A letter to the Borough Commander - engaging with the police

The growing number of police that are actively using social media (Twitter) in particular, is a really good way to engage on issues that might otherwise drop by the wayside.

As a result of the exchange below:


It prompted me to write to Wandsworth Borough commander. Given that the issues raised aren't unique to Wandsworth, I've sent a copy through to Sir Hogan-Howe as well as Living Streets and London Cycling Campaign.

I also dropped along to my local Safer Neighbourhood Team (SNT) meeting to raise the issue there. You can find details about your local team here. If you are interested in getting involved, some details about what you can do here.

And here's the letter, dropped it in to the Police Station on the 21st April 2015.

I am writing to ask you how we can more effectively tackle anti-social and dangerous behaviour by people driving on our streets.

The SNT meetings are a great forum to allow very local concerns to be flagged. However, whilst I live in a particular street in a particular ward (Furzedown), political boundaries do not apply in terms of the streets that I need to use to travel around the borough. Indeed, Wandsworth Council recognises this when, for example, it designs formal cycle routes that link different destinations across the borough. As a family we rarely use our car, most of the time we walk, cycle or use public transport.

Council policy (not under your remit) is to wait for 3 KSI's to occur in a given location in 3 consecutive years before the highway engineers at the council will investigate options to provide safer streets. Alternatively, 25% of households in the street/locality need to prepare and gather a petition. I’m not too keen on anyone having to be one of those KSI's to effect change. I don't think the current approach is an acceptable approach for a public authority - especially one that has recently taken charge of public health in Wandsworth.

In Wandsworth, people talking on their phones while driving, or driving at speeds which are inappropriate for their surroundings - to take two examples of commonly seen behaviour - rarely place the individuals driving at serious risk of injury. For those of us who are walking or cycling, however, a moment's carelessness or inattention by drivers can have serious or fatal consequences for us or our loved ones. The asymmetry of risk borne by people on foot or bicycle as compared with those within a motor vehicle is, as you will be aware, clearly shown by the road traffic casualty statistics for our borough. And, equally importantly, the perception of danger from motor traffic understandably discourages many people in Wandsworth from walking or cycling - to the detriment of everyone's health and the long-term strain on the NHS.


Moving onto specific asks, I would be grateful if you would consider the following suggestions:

1. I would like your officers to place road danger reduction and enforcement of the rules of the road as a much higher priority than it is at present. (For instance: Many drivers continue to seem unaware of Highway Code rules such as 163 and 170, both of which directly affect the safety and perceived safety of cyclists and pedestrians across our borough).

2. I would like Wandsworth Police to be supportive of consultations regarding street design and management that the professionals involved (notably highway engineers and public health officers) believe will reduce road danger and help 'rebalance' our streets towards benign modes of transport.


I make these requests in the light of supportive comments by the Mayor in response to Mayoral Questions at the London Assembly about the important role of the Metropolitan Police in supporting walking and cycling. I hope you will also agree that, at this time of pressure on public budgets, it is particularly important for us to have evidence-based policing, in order to help ensure that policing is as cost-effective as possible.


By way of background, you may be interested in the findings and recommendations of the Transport Safety Commission, which has recently made available a well argued report 'UK Transport Safety: Who is Responsible?'. You can download the prepublication version and see further details via www.pacts.org.uk/transport-safety-commission/


Happy to meet to discuss. I look forward to hearing back from you.

Will be interesting to see what response I get. If the letter resonates with you, and you don't live in Wandsworth, then feel free to adapt/tweak and contact your Borough Commander. Issues are only issues if we raise them.

At a council level, if you'd like to see Wandsworth Council adopt a pro-active approach to reducing road danger, then do lend your support to this petition.
Posted by Jon at 01:21 1 comment:

Easter: 'he will rise again'

Whilst I don't hold a religious faith, the story associated with Easter and Christ rising from the dead is one that I've grown up with.

I think it's also worth remembering the many that don't rise again, the fallen on our roads. 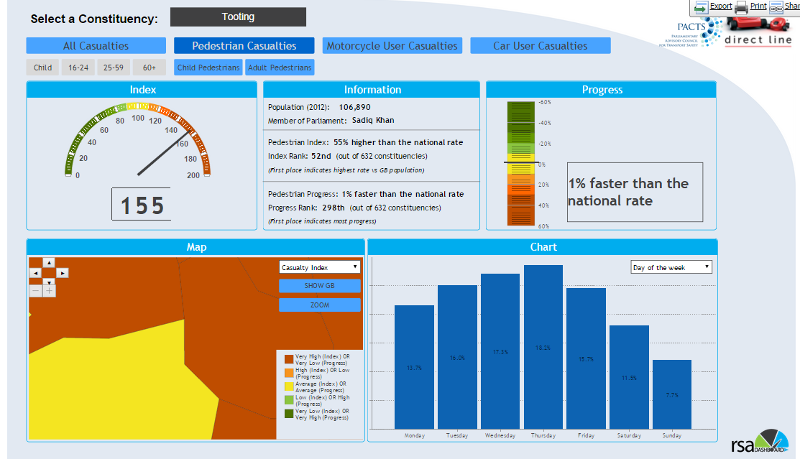 This image is from the constituency dashboard. Tooting has 55% higher level of pedestrian casualties than the national average. Worth noting that the data source for the figures are STATS19 (reported road collisions). With minor injuries the National Office for Statistics estimates that these could be under reported by a factor of 4.

At the same time that PACTS went live with the dashboard, they also released this report with a lot of very practical ideas that will hopefully be implemented by the next government (whatever form it takes - minority/coalition or unlikely but possible majority government).

We have become numb to the regular reporting of carnage on our streets. This 21 year old lady in Kingston crossing the road on foot next to her university was killed this week. The occupants of the car have survived with minor injuries.

The PACTS report linked above highlights the different approaches taken to reducing danger using different transport modes (road/rail/air) in the UK. Without serious change, more people and families will continue to lose loved ones needlessly.

At present, in Wandsworth, 3 people need to be killed or seriously injured on council managed roads, or a major petition has to be presented to allow our highway engineers to look into road safety improvements.

I don't think that's right. If you live, work or study in the borough, from Tooting in the south to Battersea in the north or Putney in the west, and agree with me, please lend your support to this petition calling for change borough-wide.
Posted by Jon at 06:34 No comments: