'Let's make Mitcham Lane safe for all' petition handed in! 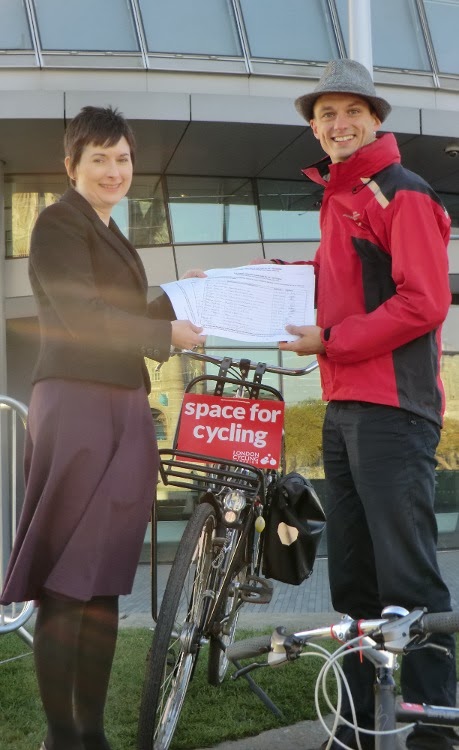 Yesterday I braved the cold, to cycle to City Hall and hand in our petition to make Mitcham Lane safe for all. Caroline Pidgeon AM, leader of the Lib Dem group at the London Assembly came out to show her support.

The specific petition ask was as follows:


We, the undersigned, call on TfL and Wandsworth Council to make changes to Mitcham Lane so that cycling can be an option for everyone, not just the fit and the brave.

It was addressed to both TfL (hence handing it in at City Hall, as our current Mayor Boris Johnson is the chair of TfL) and Wandsworth Council. Almost 550 people had signed the petition, 547 to be precise.

In terms of what can be done quickly to respond to the petition, we need look no further than Camden and Royal College Street.

How this will make the street safer for all, is as follows:

People on foot:
The main roadway will be narrowed by the provision of segregated cycle tracks/lanes. This means that people on foot will have a shorter distance to travel to cross the road which is dominated by motor traffic. A narrower road-width for motor vehicles, will encourage by design, drivers to travel at lower speeds. This in turn will give people on foot greater time to be able to safely cross the street. Also this will reduce the potential conflict between people walking and people cycling as there will be a clear space where people should cycle along.

People using bikes/trikes, mobility scooters:
They will have clear dedicated space to be able to use without needing to share what is a busy road with speeding vehicles. This will facilitate opportunities for families to be able to cycle to school, and to the local green spaces without having to compete for space on the road with motor traffic.

People driving:
The provision of cycle tracks will stop the people who currently leave cars with for sale notices along Mitcham Lane. In turn, this will also mean that sight lines for people exiting side roads which lead onto Mitcham Lane are clearer helping people to be able to judge when best to pull out. The narrower road width will as mentioned above slow down the top speed of motor traffic, resulting in drivers having more time to be able to enter the flow.

This is just one, of a series of local petitions that I'm running to improve our local area. Do check out the link on the top right of the blog to see what else you can support. It's only by campaigning together that we can make change happen.

Of late, too much blood has been spilt on our roads, we can, we must do something. We must no longer accept that avoidable death and serious injury on our roads is part and parcel of what goes with living in London. The answers exist. The only bit of the puzzle that is missing, is the political will to change.

If you'd like to help me bring about the changes we need do get in touch.
Posted by Jon at 08:38 No comments:

Last night, the Fishponds Road scheme, which readers of the blog may know, went back to committee at Wandsworth Council.

Quick re-cap, I petitioned 2 years ago, to get support to do a trial where barriers to motor traffic would be placed where the dots are on the map below. Got 243 signatures on the petition, and it was over 90% of people who I'd door knocked and asked for their support. 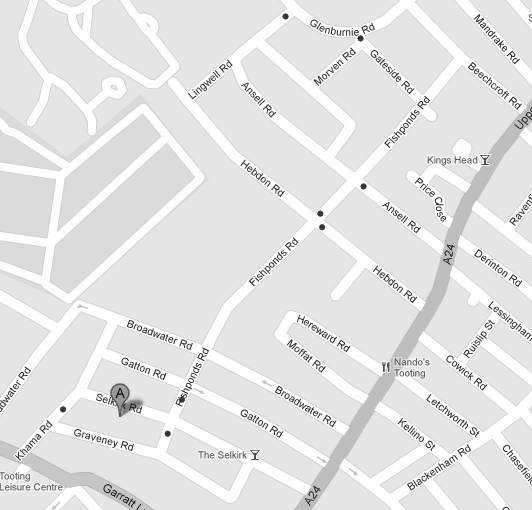 The officers had drawn up a decent paper (13-741), recommending that the scheme go forward to consultation. I raised a few points:


I would have liked to have added that as the scheme is an experiment, perhaps not all of the proposed extra signposts are necessary, which have bumped up the cost considerably as the posts 'need' to have electrical supplies.

All I can see is that there seems to be a desire to completely pamper people driving in the area and treat them as if they are idiots, as if they wouldn't be able to see a barrier in front of them. Then we wonder why we end up with so much street clutter!


Following my short piece, one of the local Labour councillors, put forward their views. The councillor flagged the reality that some local residents may not view the scheme positively. That said, the councillor was happy for it to go ahead to consultation, and that if there was enough local support to conduct the trial they too would be supportive.

Cllr King who is the relevant Cabinet member then gave the impression that as previous consultations, of a different nature, to deal with the recognised problem had failed, that local residents have already had their chance. A compromise was finally reached that the consultation would go ahead, and that a target of 40% response to the consultation would be needed in order for any trial to go-ahead.


So, good news is that we are going to have a consultation.  Challenge is that 40% response rate is bloody high.

So, if you live locally, or in south west London, and think that trialling different ways to make our streets safer is a sensible way to go, I'm going to need your help.

When the consultation document goes out, a lot of people tend to ignore them. People who tend to respond all too often are those who object. I really believe that this type of scheme will work, and will deliver huge benefits to the local area. In fact the officers even state in their conclusions:

There is a possibility that there will be a increase in traffic flows in some residential roads due to transfer of traffic on account of the point closures, but this will be offset by the forecasted reduction in (motor) traffic over the larger area.


If you'd like to see real space for cycling, this is one of the measures that needs to happen. It'll only happen with local support. Local people are more likely to support it, if other local people ask them to.

Will you join me?

Drop me a line jon.irwin[at]gmail.com if you are keen. When the consultation document gets sent out, we can then go door to door.

Together we can make our streets safer.
Posted by Jon at 04:28 No comments:

Today the Conservative group of the London Assembly published a report which flags up the appalling record of TfL's buses in terms of people killed and seriously injured. The irony that this record is under a Conservative Mayoralty wasn't lost on me.

Richard Tracey and I were asked to speak on Nic Ferrari's LBC morning show about the report. Richard mentioned the new road design which has been unveiled along Bow. In the past few minutes, we've sadly heard that another lady has lost her life there as a result of a collision with a lorry.

He said these things (segregated routes) take time and money, and managed to drop in a touch of victim blaming too by suggesting that jaywalking is a serious factor in bus on pedestrian collisions.

Yes redesigning our streets will take time and money.

I think enough blood money has been spent and spilt on our roads to call time on inaction and get on with separating people on bikes along main roads. The Olympics showed us how quickly we can change our streets. The only thing that is needed is political will to make it happen quickly.

Camden have introduced light segregated cycle route along Royal College Street. There are a ton of roads across London who could be treated quickly in this fashion, and make a real difference to road safety for everyone. Over 500 people have signed my petition which in essence calls for similar work to be done on Mitcham Lane. It's time for change.

Our politicians currently in the driving seat just aren't putting changes in quick enough, and this costs lives.

Question for us, is do we want to change our streets for the better, or are we happy with a level of death and injury that would have public enquiries being conducted if it was on our rail network?

TfL buses average 1 KSI per day. That doesn't even count the rest of the traffic.

Please support space4cycling.org by adding your name to the list. Next year we'll have local elections in London, and we need to make sure that candidates of every party know that we demand safer streets, and the time for them is now.
Posted by Jon at 02:24 1 comment:

I haven't blogged in a while, and thought I should write a brief update as to how we are doing with our local #Space4Cycling or safer streets petitions. They all tie in nicely with what the London Cycling Campaign policies for the 2014 local elections, see more on those details here.

Fishponds Road - was presented to council in July 2012. I'm hoping that it'll go back to committee on the 19th November. Agenda for that should be published on the 11th or 12th November. Fingers crossed on that one as it'll be a first locally. Assuming that this one hits the ground it'll go a long way to achieving the "No through-motor-traffic zones, & Safer cycle routes to school" themes mentioned on the space4cycling.org website.

Let's make Mitcham Lane safe for all - as I'm typing this we've got just shy of 500 people who've signed it. It's going to be presented to the council and to the Mayor of London on the 4th December.

Better, safer streets for Clapham Common - Now over the 200 mark, with a target to reach of 1000. As you can see from the stuff above and below, I've been a little busy on other things so this one is ticking up albeit a little slower.

Better, safer, people-friendly streets for Smallwood Road / Fountain Road residents - Currently this has just over 220 people who have signed the petition. The headmaster of Smallwood Primary School has expressed his support, and when I've been door-knocking over 80% of people asked are happy to support this petition.

A safer Elmbourne Road and Dr Johnson Avenue (Tooting Common) - Just shy of 200 on 179 at the moment. The proposal for Dr Johnson Avenue ties in very much with the Greenways that Andrew Gilligan has been talking about. So I'm optimistic that we'll at least be able to have a trial, or feasibility study of some sort.

Safer, people-friendly streets for Wandsworth - 20mph is plenty - only just gone live as of a few days ago. The council is moving too slowly on this in my opinion, and that of quite a number of local civic society groups. Hence the call for a borough-wide consultation. All the evidence shows that it would be strongly supported, so if this is the first you've heard about it, please do sign!