The recently commenced road works to do essential gas works on Trinity road have galvanised TfL and Wandsworth Councils’ highway engineers into action.

In pushing through these temporary measures, the engineers are highlighting how quickly our streets can be reconfigured if the desire/need is deemed important enough. Gas works essential to re-design the streets, people getting hurt less so.

Sadly, as is all too common, little or no consideration for walking or cycling has been given. The pictures below ‘closing’ the pedestrian crossings give sight to a culture that puts walking as a non-essential means of transport.

With the gyratory type system which has been implemented for motor traffic, cycling contraflows could easily be permitted. The ‘filtering’ of some of the residential streets with no entry signs could be just for motor vehicles, allowing people on bikes to still use the streets in both directions.

You may think you missed the ‘consultation’ on these changes, but you didn’t, because the works are deemed to be essential.

When people ask through petitions, as I have done, councillors have rejected them. Either using difference of opinion from resident responses as to what will happen to prevent a trial taking place, or citing a lack of people getting hurt to justify inaction. The screen grab below is from Crashmap.co.uk, self evidently there is an issue at the junction of St James's Drive and Trinity Road. 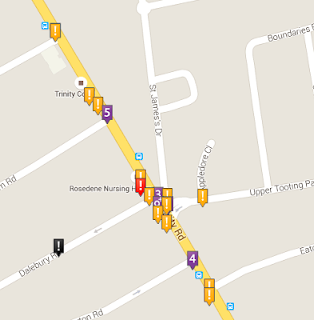 I have asked in the past for traffic counts to be carried out when works such as these take place. I am confident that none are being done or were planned. The closing of the pedestrian crossings highlights that no real thought has been given to people walking through the area whilst the works are on-going. With so little thought given to even that, a traffic count to see the actual effects of the re-design would be a step too far.

The re-routing of the 319 has also resulted in 4 stops being suspended, with no temporary or request stops in place.

Seems that when you don't drive in Wandsworth your views and needs don't count. For all the warm words in terms of draft cycling strategy, or the walking strategy from years ago, the current consultation for a new strategy on air quality, without the political will to re-think how our streets are managed and run, little is likely to happen soon.

If you'd like to see real action, there are a bunch of petitions available to sign here.

I cycled past on Tuesday evening (30th June) to play touch, didn't have time to take pictures. The pedestrian crossings at St James Drive are no longer blocked. There is also a temporary bus stop on the route. Cycling against the flow of traffic is currently banned, although I don't understand why it should be.

I've also put in an FOI request to see if any consideration had been given to doing traffic counts as part of this work.
Posted by Jon at 06:51