Today the Conservative group of the London Assembly published a report which flags up the appalling record of TfL's buses in terms of people killed and seriously injured. The irony that this record is under a Conservative Mayoralty wasn't lost on me.

Richard Tracey and I were asked to speak on Nic Ferrari's LBC morning show about the report. Richard mentioned the new road design which has been unveiled along Bow. In the past few minutes, we've sadly heard that another lady has lost her life there as a result of a collision with a lorry.

He said these things (segregated routes) take time and money, and managed to drop in a touch of victim blaming too by suggesting that jaywalking is a serious factor in bus on pedestrian collisions.

Yes redesigning our streets will take time and money.

I think enough blood money has been spent and spilt on our roads to call time on inaction and get on with separating people on bikes along main roads. The Olympics showed us how quickly we can change our streets. The only thing that is needed is political will to make it happen quickly.

Camden have introduced light segregated cycle route along Royal College Street. There are a ton of roads across London who could be treated quickly in this fashion, and make a real difference to road safety for everyone. Over 500 people have signed my petition which in essence calls for similar work to be done on Mitcham Lane. It's time for change.

Our politicians currently in the driving seat just aren't putting changes in quick enough, and this costs lives.

Question for us, is do we want to change our streets for the better, or are we happy with a level of death and injury that would have public enquiries being conducted if it was on our rail network?

TfL buses average 1 KSI per day. That doesn't even count the rest of the traffic.

Please support space4cycling.org by adding your name to the list. Next year we'll have local elections in London, and we need to make sure that candidates of every party know that we demand safer streets, and the time for them is now.
Posted by Jon at 02:24 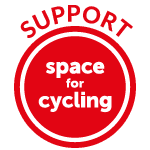